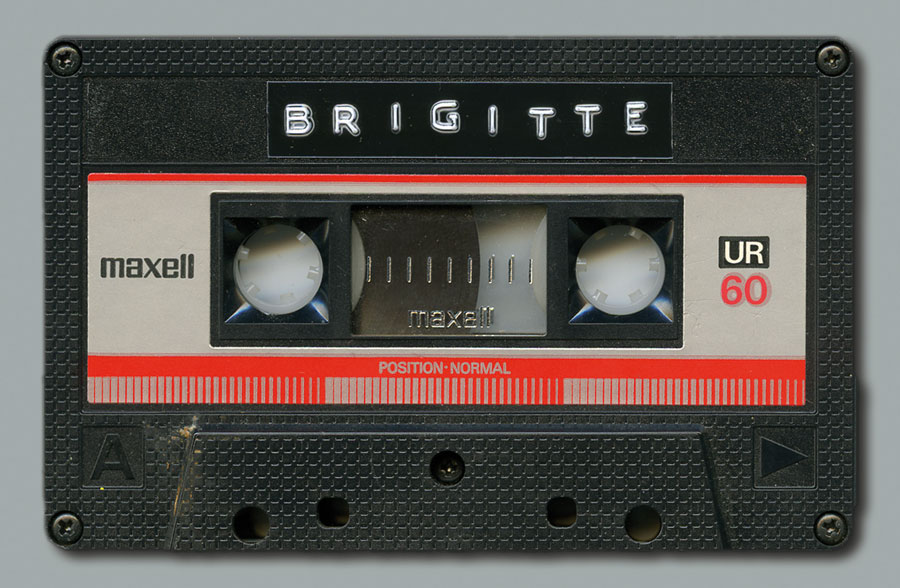 (...) Hi Brigitte, Christian de Spa here. Um, I’m calling to ask you to call me back… I have a few things to explain to you and something to ask you but, uhh, it will be easier to tell you if you call me back. Try calling me back between 3 and 6. That’s it, thanks and speak to you later.

Created and presented for the first time at the Théâtre National de Bruxelles, Brigitte is an audio and video installation by Jean-Benoît Ugeux and Wolfgang Natlacen. Brigitte is also a Belgian-Walloon story whose insidiously comical aspects are progressively replaced by an overall feeling of uneasiness and disquiet which soon turns into a sense of fear and dread.

Brigitte, a story of escape, loss and disappearance, is a horror-like installation without either a murder or blood, though sweat and anguish are here colder than death. While voyeurism is concerned generally with the gaze, in this case the idea of transgression is linked to what we hear. “An unlabeled audiotape is found in the street. When listening to it, we understand it comes from the answering machine of a woman called Brigitte”, as is explained in the introductory text to the installation.

For approximately 20 minutes, the audience listens to telephone messages left by men and women who are more and more anxious, saddened or infuriated by the absence and silence of Brigitte. The heroin is obviously on bad terms with many of them.

(...) Brigitte, it’s Marie-Rose here, I would advise you to bring me the rest of my money because I’ve gotten the police involved now! You’d better take care of this! I just wanted to warn you, ok, or else you’ll never be left alone, everyday we’ll be in front of your house. I wanted to warn you! And your parents would have been warned too. Now you know, bye… It’s really too bad for your kids. 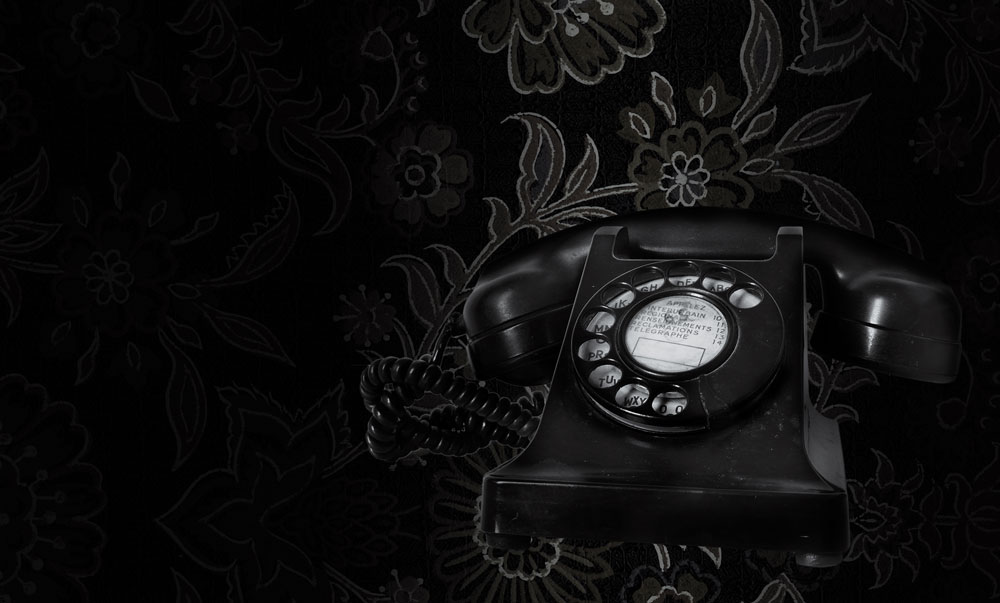 The missing Brigitte conjures up not only the protagonist of a film noir but also the driving force behind this great dramatic narrative genre of the 20th century itself. Thus Brigitte could embody the emblematic and ambiguous figure of the vanished woman who either has run away and disappeared into thin air, or has departed and gone to the next world. Has the image of Brigitte faded where her body will be found, or has she started a new life under another identity? Has Brigitte already become someone else? The audience cannot help but imagine what will never be shown, what will remain undecidable, deprived of a denouement, a story whose ins and outs no one will ever be able to grasp. The audience thus fills in the blanks and replaces the missing aspects with fiction. As the listeners, in spite of themselves, imagine what is invisible (out of shot) and unthinkable (the catastrophe), this unintended fictionalizing process is reinforced by the visual device of the installation.

(...) So Brigitte, now I’ve pressed charges with the police… at Bevercée.

(...) Muller Establishment. Since we have not yet received the payment, we are contacting our… lawyer. Good bye and thank you.

Sitting in the middle of the room, the spectator watches images projected onto the walls: four sequence shots showing a landscape on which a road flashes past. Straight or winding roads, snowy roads, country roads filmed at dusk or night roads lit up by the headlights of a car. While lost in the contemplation of this moving landscape, which disappears and reappears each time identically, the viewer is plunged into a hypnotic place conducive to mental motions. In an almost literal way, this space seems as if occupied by a double vanishing line: the optical vanishing line of the horizon which keeps evading us and the vanishing line moving forward, escaping along a road which seems to be leading nowhere and which Brigitte may follow to better disappear into the immensity of the landscape or into the darkness of the night. The magnetic tape of the answering machine, combined with the landscape, could then play the role of a voice-over device like in the well-known film noir sequence of a famous horror thriller, in which the character of Marion Crane runs away from Phoenix in her car after having stolen 40.000 dollars. During the rainy ride, by day and night, the character imagines voices discussing her theft with hostility. While the character of Brigitte returns us to Marion and the installation Brigitte reminds us, through its scopic drive, of the narrative device and set of Hichcock’s Psycho, the comparison stops here. For Marion is a fictitious character, while Brigitte is a real person. 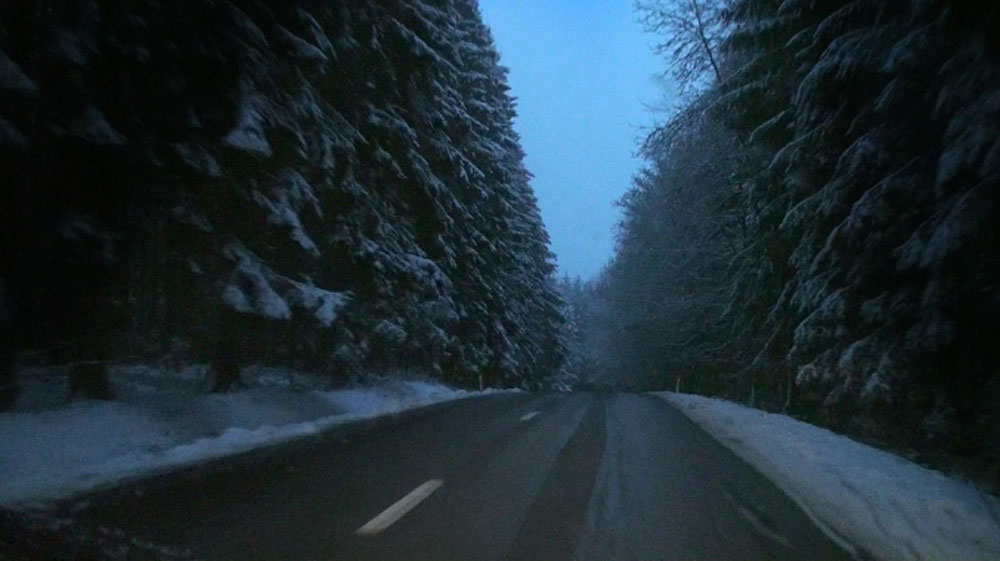 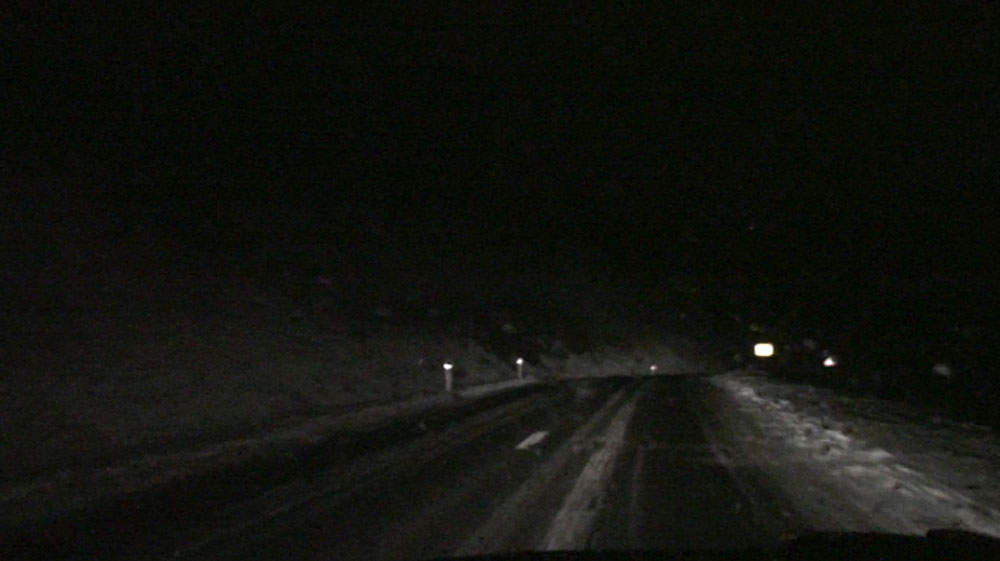 The juxtaposition of sounds and images, of recorded voices and filmed landscapes, refers to a lugubrious annihilation process of beings and things. An entropy of horror? Brigitte creates a situation whose seemingly irreversible deterioration could lead to an imminent catastrophe. But during this waking nightmare, only silence, absence, erasure and disappearance prevail. If Brigitte is truly real, then she only exists through her own absence, in the words of her creditors and the people she is financially or morally beholden to. With Brigitte, secrets do not surface again like will-o’-the-wisps but sink endlessly into the icy darkness of the ocean’s depths.


translated from the French by Blandine Longre and Paul Stubbs