KISS ME DEADLY
WOMANITY or The Kisses of the Lycaon pictus
Cécile Mainardi __ January 06, 2014
<> PDF

Even if well filmed, the kissing scene, in which the woman, kissed by force, is first recalcitrant then willing, and melts like vanilla ice-cream under the thawing effects of a kiss, does not hold water. We do not believe it. We do not believe it anymore. The woman is a muscle contracted by the man, his kiss her relaxant. The woman does not want such a man but she always wants a kiss, even if taken by force, even if stolen. The whiff of male chauvinistic violence which imbues such a scene is no longer acceptable today. And except in old Western movies, we hardly see such tableaux anymore. These days are gone, as we say. The history and progress of feminism have, thank god, swept them off the big screen. Though perhaps the only time when I really believed it again was in Blade Runner. The biological distinction of the characters (a real man, a female humanoid) partly explains it, as well as the perfectly amazing inexperience of the female character who experiences her first fling with a human being. Paradigm upheaval: the properties of the kiss are suddenly reversed; instead of providing oblivion, the kiss brings back the memory (the one encoded in the very young brain of the “replicant”)[1]. 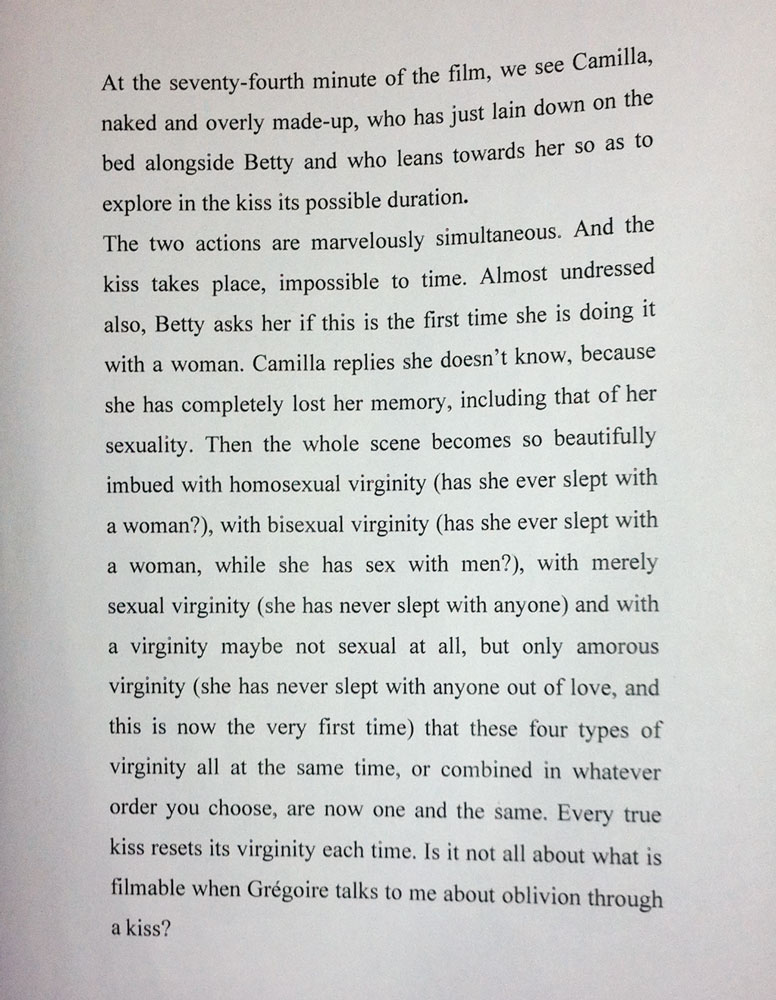 The beautiful dark-haired replicant, programmed for four years of life, has never kissed a man before; she is practically a virgin, devoid of experience and memories. Her only knowledge of sexual matters depends in fact on the talent of her maker, on the libidinal program which he installed or not on her memory card. Like the skills on the piano she has displayed in the previous scene (as if by chance), she discovers it by experiencing and experimenting it[2]. 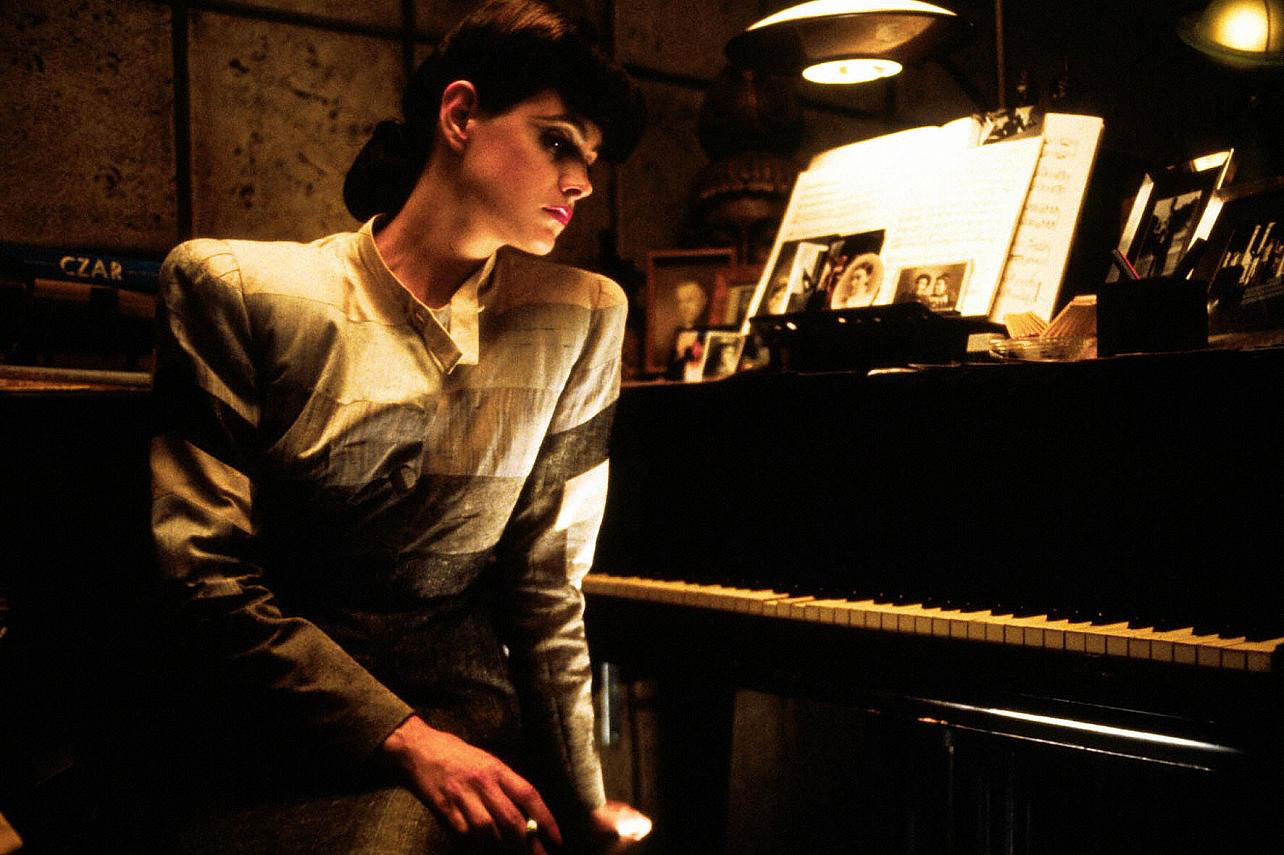 When the moment comes for her to undergo the amorous assaults of the one who, at this point of the story, is hunting her down and, incidentally, is supposed to kill her, she has reason to freak out. What’s happening? What is going to happen? Total interference. She does not understand anything about the scene, wonders what is in store for her. Like a frightened, white laboratory mice, she runs around the room. Yet Harrison Ford’s kiss quickly refreshes her memory, exhumes this buried knowledge, “reboots her program”. The “kissing” application has been started, as we might put it. This memory is undoubtedly hers. Fiery and quivering, passion flares up within her when the hero kisses her. And abandoning herself without restraint to its voluptuousness, she adjusts her memory level to his own, in the same way we check the oil level of an engine: everything’s going swimmingly.

Unless, and more likely (which amounts to the same for us, who are watching these fascinating images[3]), she succumbs to the intrinsically human charm of Harrison Ford, so much so that she becomes a real woman, leaving behind her status as a replicant—a sexual chrysalis in the midst of a robotic universe. O pure magic of the bodies! She renounces her artificial intelligence, gaining access to a hormonal paradise. A purely instinctive flow! Her sole physical attraction to Harrison Ford is stronger than anything. She does not obey any program any longer, goes beyond them all and transcends her own machine-like nature. Letting herself get carried away, she experiences the vertigo of the senses, the kiss of her pursuer sending her back into the bosom of a fragile humanity and onto the shores of the feminine continent. He does not reinitialize her, but initiates her (for it is all about initiation, not initialization), he makes a naturalized woman of her by denaturalizing her as a robot, he starts off her metamorphosis, her metamorphoses, her future as a human-being and her future as a woman.

What a beautiful fable: both futures are achieved at the same time. And it is not only her future as a woman (the woman who, according to Lacan, is identified by man), it is also her future as a human-being which is accomplished, before our very eyes, through this magical union of mouths; humanity is passed down by a kiss, as is the case with this reputedly deadly disease among African wild dogs (the only animals, to my knowledge, able to play tonsil hockey[4] by wrapping their tongue inside the mouth of the other to show their contentment of being together), a plague which sometimes decimates whole packs of wolves. This time, the des-identifying power of the kiss identifies!

Womanity could be the name of this new state, the result of these metamorphoses, of this star-shaped metamorphosis. But let’s not get carried away: Womanity, the latest perfume by Thierry Mugler 2010[5], advocates on the contrary a new humanity consisting of only women, or more perversely, tries to validate the now epochal separation of two humanities: that of women on one side and that of men on the other. The promotional video clip of the perfume shows women warriors wearing replica helmets (what exactly is the implicit war these Amazons are waging? Against which unidentifiable enemy are they armed?) They are four (actually, two + the same ones wearing masks —masqueraded feminity) inside each of the four frames which divide the screen—and perfectly self-sufficient, thus reflected in these narcissistic mirrors—“The most important is what women learn from each other”, is stated at the start of the promotional clip. From other women, of course. As if, because of the hysteria of our own time, a woman could not, should not learn from any man any more: the end of the man/woman Rilkean complementarity, a Lacanian counter-prophecy. We are far from the now obsolete “hyper-hetero” paradise described by Ridley Scott, in which it is on the other, on an “alter” more than on an “hetero” (the woman, the android, the sick one, the child—the young geneticist puppeteer suffering from premature aging that makes him an old man-child), that an increased humanity is based, a humanity which, by not being opposed any more to a world of non-humans, of evil-humans, of the hardly humans, is not opposed to itself and precisely carries the possibility of still believing in a world.

A “womanity” made up exclusively of women versus a humanity made up of men? A “womanity” instead of a humanity of joint men and women, free adversaries, never strangers nor enemies? Another, new humanity? An extra humanity? One humanity short? Or no more humanity at all? Same-sex marriage for everyone, but community for no one, because this sweet-and-salty fragrance, composed of fig and caviar scents (of fig chutney, you couldn’t make it up! It is even more baffling if one knows the meaning of the word in Italian—“pussy concentrate”) smacks of differentialism, widens the gap of separatism, prohibits gender diversity and seemingly invents a new form of racism, a new type of segregation, no more based on the skin this time, but on the chromosomes. In the global village, men and women are now kept apart.

[1] In this regard, the kiss of Camilla and Betty, the two reversible heroines of Mulholland Drive, also happens with a background of amnesia, which loads it again with an absolutely inchoative force. Cf the excerpt from the poem “Rose activité mortelle”.
[2] Here we are presented with a singular case of the learning process. Neither the famous “Practice makes perfect”, nor the Platonic “learning is recollecting”, but a strange mixture of the two, something like “Practice has already made perfect, learning is already recollecting”.
[3] Because the fictional force of the film is so intense that a second fiction stems from its own interpretations.
[4] It seems to me that this expression, like its twin « tongue wrestling », has always debased the ordeal of the kiss to a maxillary exercise as trivial and fun as that of chewing gum or eating popcorn. In its convertible cars, America has been able to mix both marvelously. Who has never seen a film where the boy or the girl carefully removes a piece of gum from his/her mouth before kissing his/her partner?
[5] Womanity is the first perfume ever with a sweet and salty note, an innovation in perfumery, though this might be too futuristic.