On the autumnal morning of Thursday the 4th of October, I decide to visit the Cathedral Saint-Sauveur, in Aix-en-Provence. As soon as I enter the place, I see a sign welcoming visitors:

Hold your backpack in front of you away from any hand that might slip into it to take your wallet or your money.

In the same way, don’t give money to the beggars in this church; they may jostle you in order to hit the “jackpot” or even less.

In the event of any problems, please inform the staff of the Cathedral right away, they will contact the local police (...).

To the skeptics who would have difficulty to believe in wallet thefts in the house of God: just take a look at the pictures below. Such is the discreet charm of the Archdiocese of Aix-en-Provence, a subprefecture town of a county that some obligingly nickname Bouges-du-Rhône[1]. 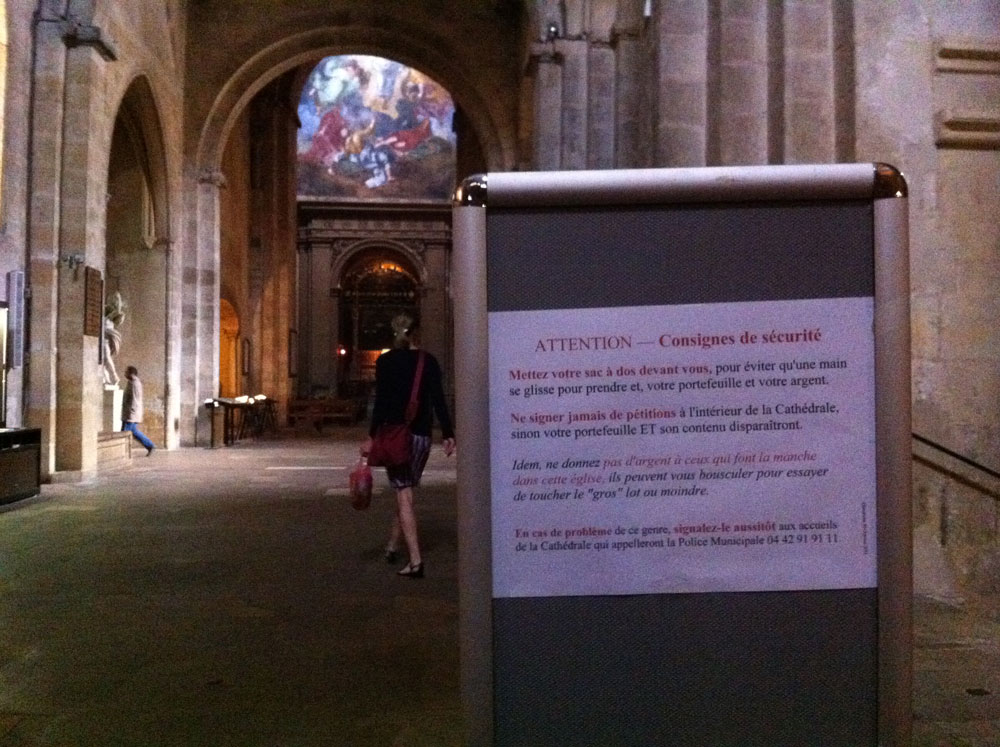 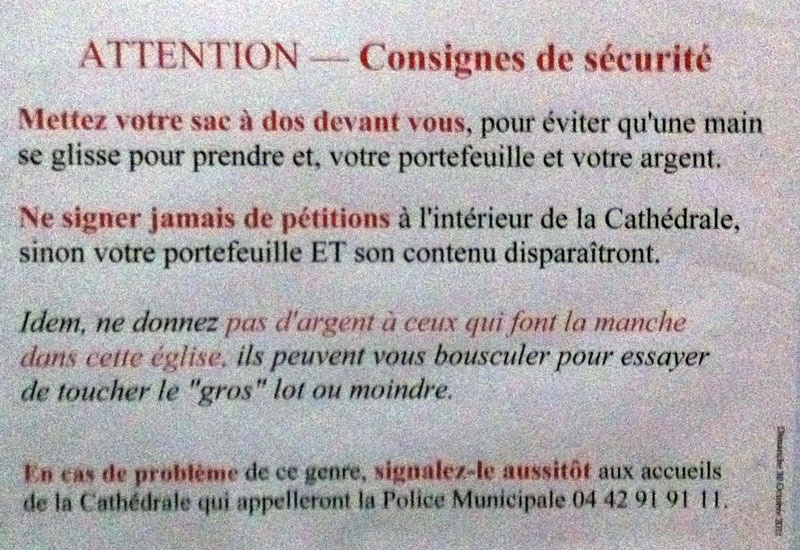 A bit further on, a second sign forewarns any disappointment. The Triptych of the Burning Bush (1475), an altarpiece by Nicolas Froment, is hidden from view. After seven years of restoration and according to the press release issued by the Direction Régionale des Affaires Culturelles de Provence-Alpes-Cote-d’Azur[2], “a protocol is being experimented: the panels are closed and opened alternatively, for patrimonial preservation and liturgical functionality...” 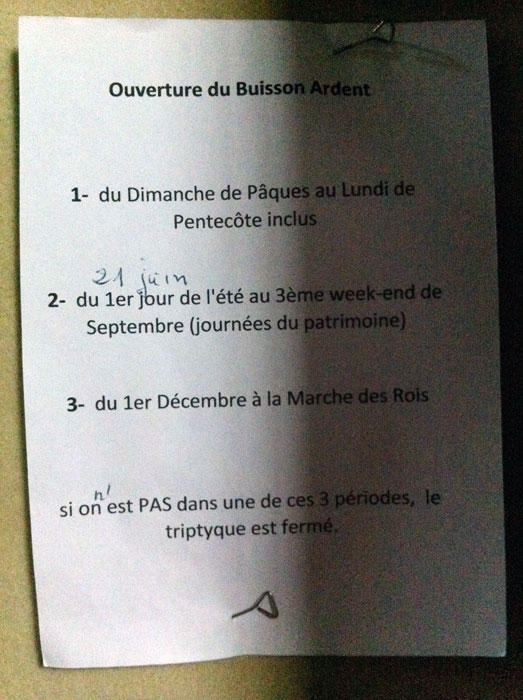 No salvation is possible outside of “liturgical functionality”! The sacred scene is concealed from the visitor’s view. I won’t be able to see either the burning bush whose incandescence cannot melt down the baby Jesus in the arms of the Virgin Mary, or their faces surrounded by flames reflected in a mirror. Today, the altarpiece is closed and only the shutters in grisaille painting, representing the sculptures of the Angel and the Virgin of the Annunciation, are visible. This pictorial representation is a striking optical illusion which simulates the sculpture and the grey overtones of the cut stone. 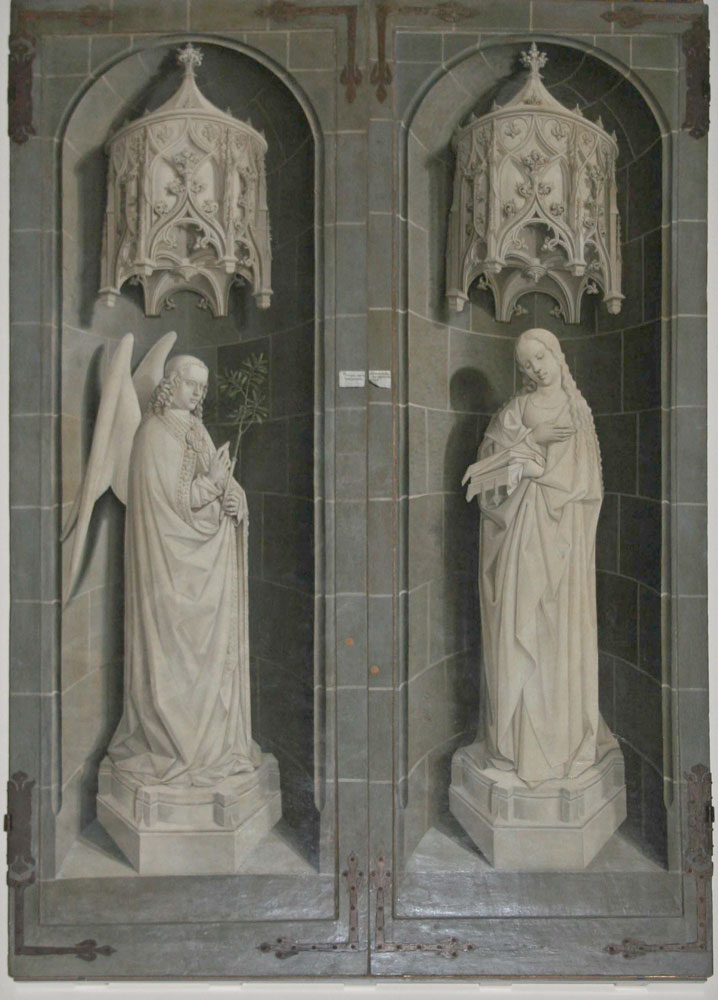 Further away, in the nave, I discover a wax statue of The Infant Jesus Bearing the Instruments of the Passion (1677). This sculpture or wax doll has its origins in a religious apparition. On June the 15th, 1658, the infant Jesus appeared to Jeanne Perraud, also known as Joan the Mystic. The exalted woman died unexpectedly of a violent fever. It took many hours for her burning body to become cold. The following year, a sculpture representing her vision was erected in homage to this Joan who did not hear voices but saw images of the Lord. The yellowish complexion of the Infant Jesus, which conjures up the idea of disease, disturbs me. Yet the worse is still to come. 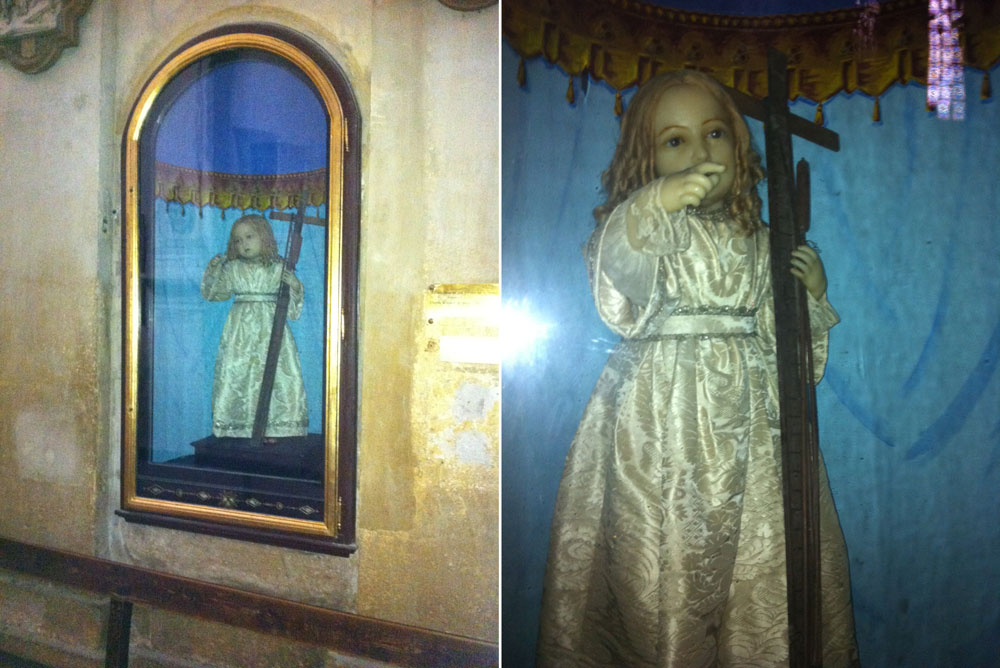 The Infant Jesus Bearing the Instruments of the Passion (1677)

The son of God reminds me of another horrifying wax vision of death and corpses, which I struggle in vain to remember. What is the nightmare hidden beneath the wax mask? I recall some horror films: House of Wax (1953) with Vincent Price and its remake House of Wax (2005) with Paris Hilton, the “sextape star”, nastily nicknamed the Bimbo of luxury hotels or the Hollywood Slut. 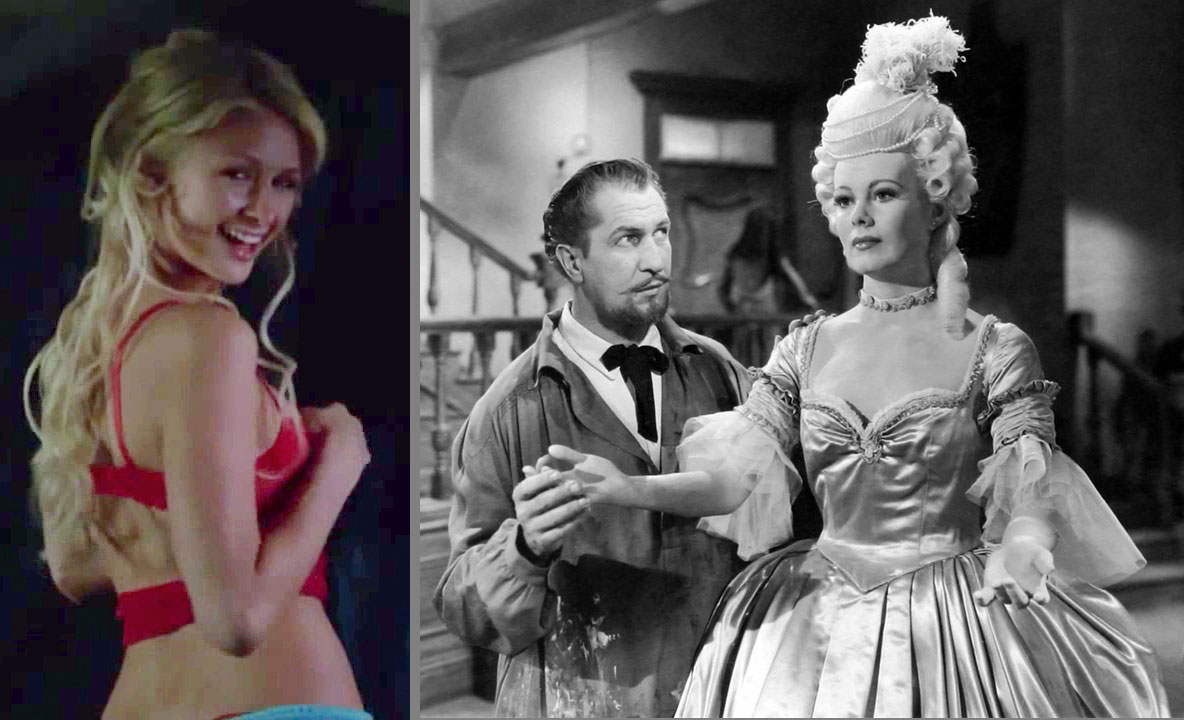 Kim Kardashian, another sextape starlet, was recently immortalized at Madame Tussaud’s Wax museum in New York. On the day of the inauguration, under the camera flashlights, Kim in the flesh and her wax figure proudly took up the pose, both clad in a tight-fitting pink dress, their hands on their hips. Between two flashlights, the actress and her double swapped places. —Who am I? A fake wax figure or a real pink doll whose body is molded in vinyl or latex? wondered one of them. As is proclaimed by the slogan of the erotico-horror movie, The Exotic House of Wax (1997): “The action heats up when history’s most memorable icons come to life for an amorous meltdown in this interactive ‘please touch’ museum.” Wax faces have immortalized the dead for a long time. Revolutionary nightmare in Paris-Disneyland in 1793. It is said that Marie Tussaud molded the faces of Marie Antoinette, Louis XVI and Robespierre by applying beeswax on their bloody heads, freshly severed by the guillotine.

What is this haunting reflection which evades me?

In the darkness of the Cathedral Saint-Sauveur, Paris Hilton, Kim Kardashian and Marie Tussaud have nothing to do with it. The macabre image continues to remain elusive. 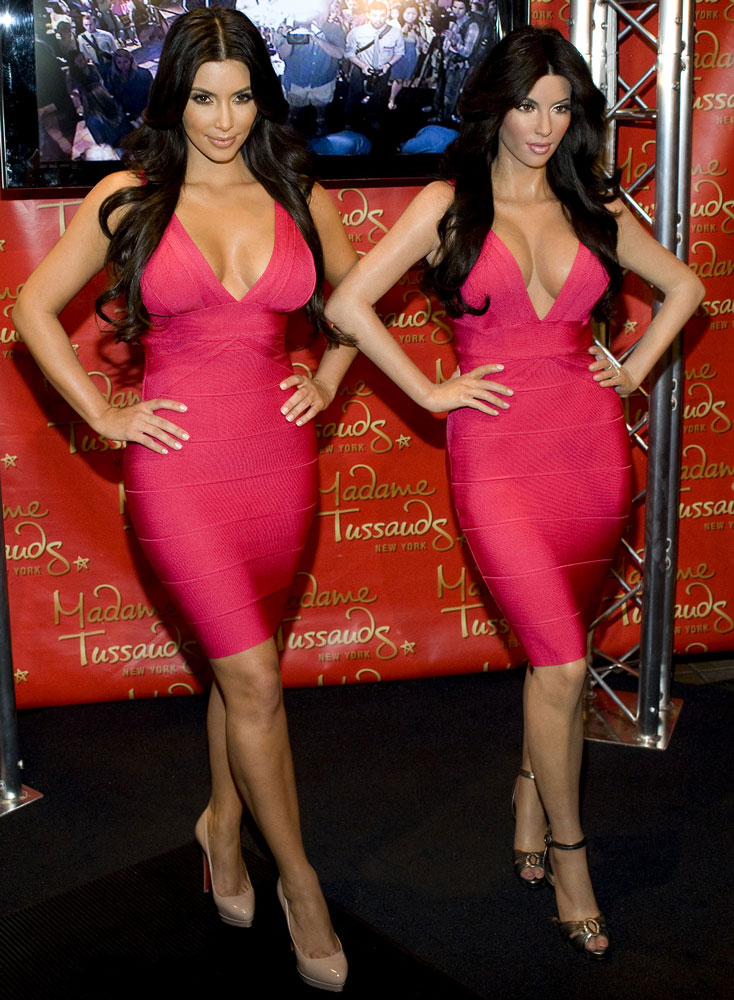 Kim Kardashian: the wax figure and its double in the flesh.

I am a doll of wax, a doll of sawdust
My heart is etched in my songs

Serge Gainsbourg’s song, performed by France Gall, was the winning entry in the Eurovision Song Contest of 1965. But on November 30th 1660, Christ appeared once more to Jeanne. His features were no longer those of a child bearing the instruments of the Passion, but those of a grown-up man, who would soon bend under the weight of his cross while climbing to Calvary. Christ murmured something in Jeanne’s ear. What did he tell her? Let’s get closer so as to better overhear him. The apparition asked for her heart. My heart is etched... Was she going to give it to him? Suddenly, the image of Christ on the cross reveals itself to me. It is not an apparition, hardly a vision: that of a martyr of wax on a wooden cross. I see the crucified Christ melting in the sun, like Icarus falling from the sky towards the sea. Feeling dizzy, I sit down on the pew next to the statue.

Little by little, I take a grip on myself.

Before entering the cathedral, in a bookshop round the corner, I bought Sade, Fourier, Loyola, an essay by Roland Barthes. I open it at random, page 140: “text: Sade II, paragraph: Impossibilia”—and I cannot believe my eyes. “If some group conceived the desire to realize literally one of the orgies described by Sade (like this positivistic doctor who crucified an actual cadaver to show that the crucifixion as described in the Gospels was anatomically impossible, or in any case could not have produced the Christ on the cross as depicted by painters), the Sadian scene would soon appear outside of any reality...”

Who was this positivistic doctor, a grave desecrator, an expert on crucifixions and on impossible contortions? A fantasy or a lie invented by Roland Barthes? All of a sudden, outside of any reality, I remember the heady yet elusive image. The feeling of dread that the wax sculpture of the Infant Jesus has aroused in me was triggered by another scene. A scene straight out of Hell, a theater of vanitas and of… wax, by Gaetano Zumbo, who was born in Syracuse in 1656 and died of a hemorrhage in Paris in 1701. Zumbo was a sculptor and wax modeler who worked in Florence under the patronage of the Grand Duke of Tuscany. Amid a landscape in ruins, Zumbo chiseled a small sculpted scene of wax figures depicting plague victims: as if in a mass grave, heaps of carcasses are revealed; the necrosed, greenish and putrefied corpses of men, women, children, old people and infants. With a scarf on his nose to protect himself from the pestilential emanations, a muscular man carries another victim in his arms. Well before zombies were in vogue, Zumbo was a past master in the art of the living-dead.

In 1775, during his second Italian journey, Sade stayed in Florence. While visiting the gallery of the Grand Duke, he discovered a painting which delighted him: “From there I came across the famous Venus by Titian, and I must confess that my senses were more moved by the contemplation of this sublime painting than by Ferdinand’s ex-votos; the beautiful aspects of nature interest the soul, while religious extravagances make it shiver.” After having admired the Venus, this “beautiful blonde” seen “on a white mattress, scattering flowers with one hand, hiding her lovely little snatch with the other”, he entered another room... 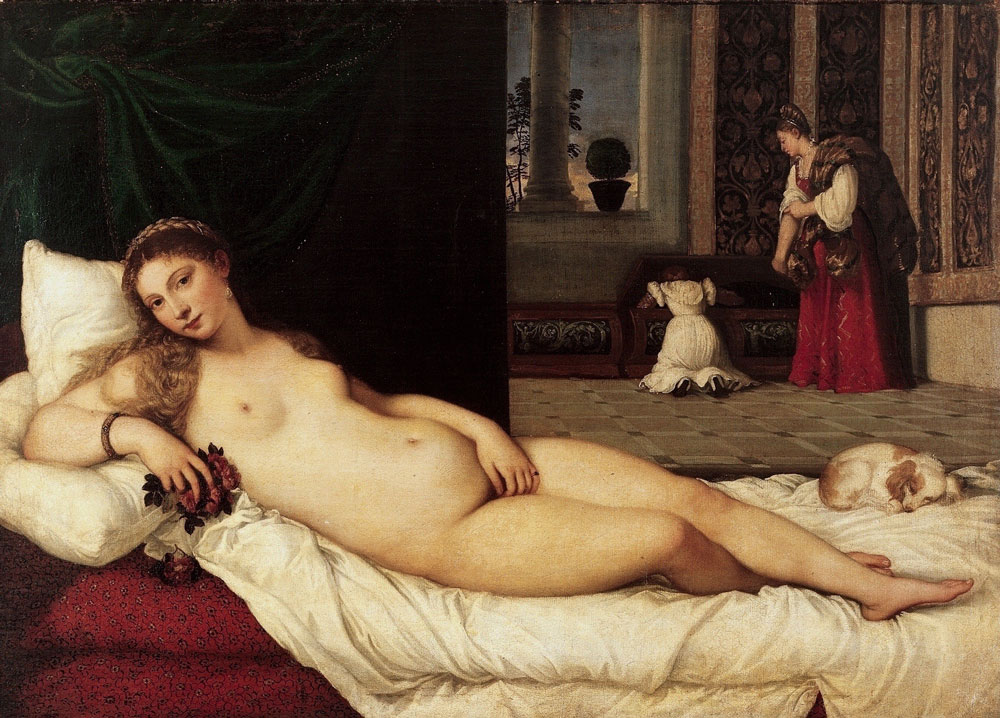 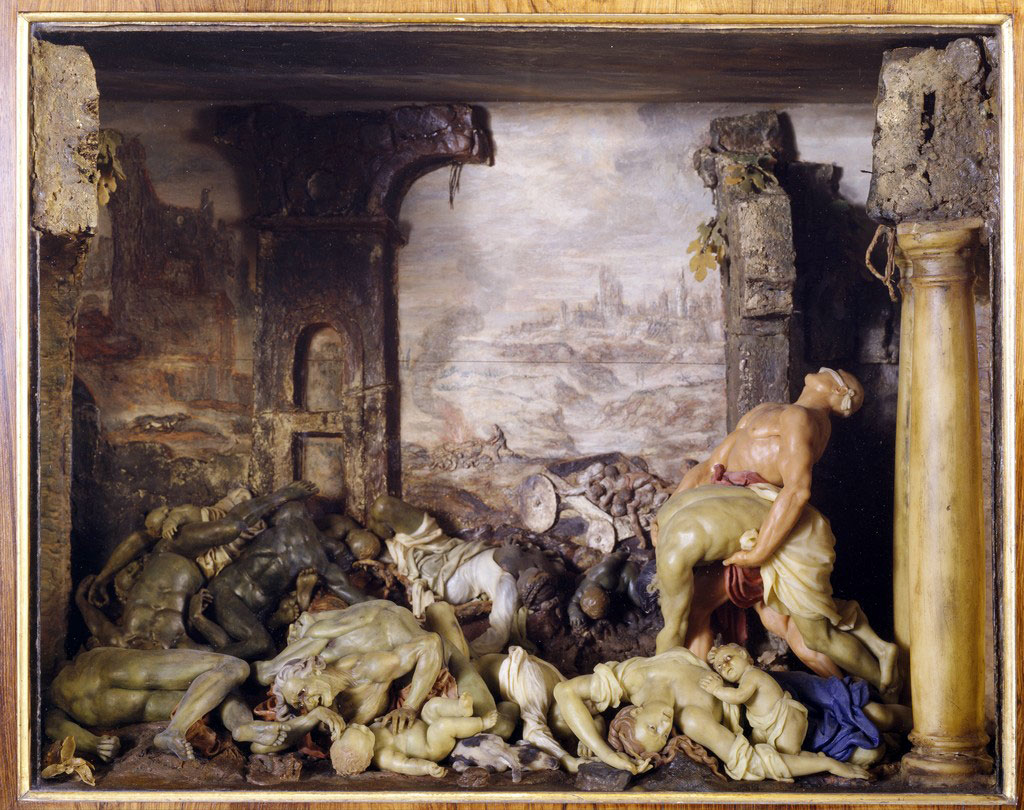 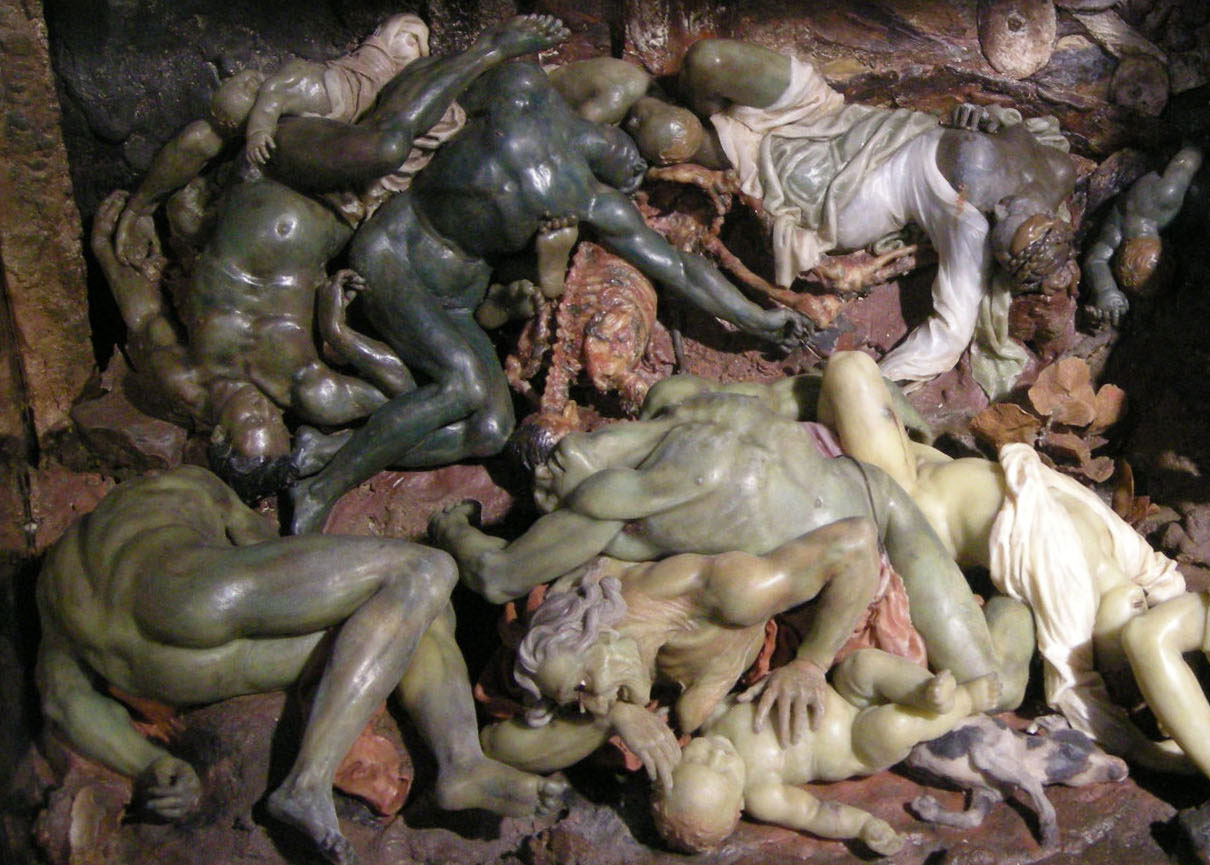 The vital surge gave way to death, inexorable and irreversible. Darkness invaded the landscape. A huge and disquieting shadow floated above the surface of the earth. The mound of Venus disappeared in the gloom. Black threatening clouds gathered in the seventh heaven. From life to death, from Eros to Thanatos, the relentless Grim Reaper replaced Cupid’s arrows. 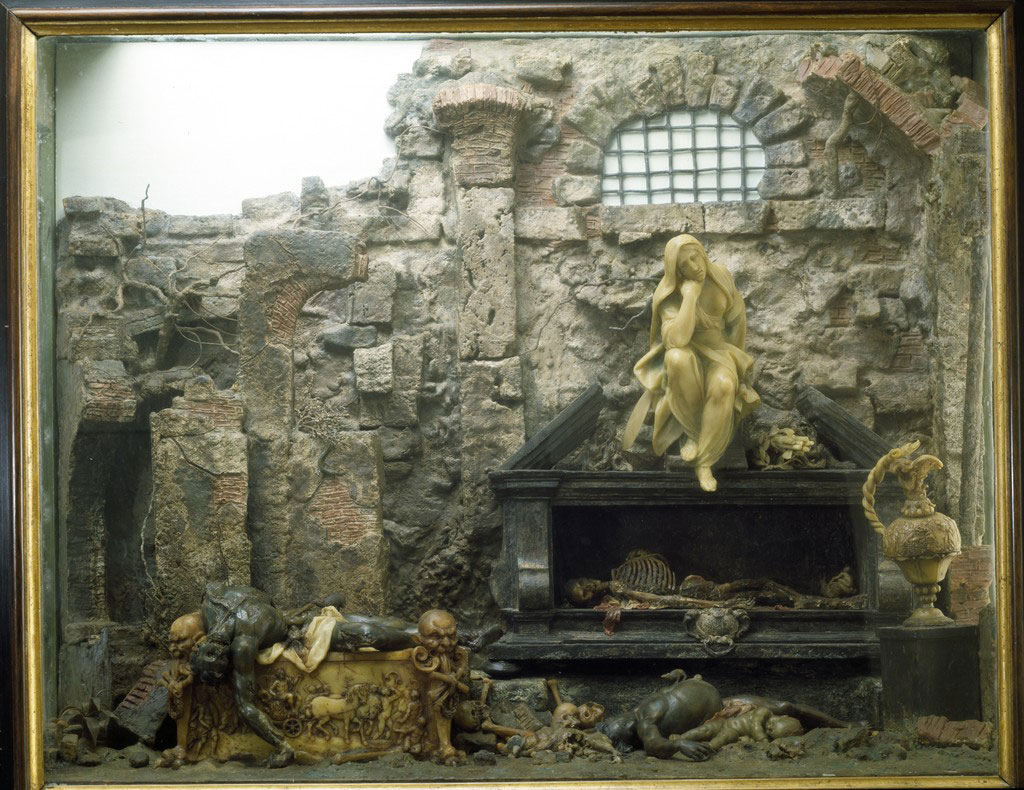 In Juliette or The Prosperities of Vice, Sade described Zumbo’s work in those terms: “A weird project is carried out in this room. We can see a sepulchre full of corpses, on which can be observed all the different stages of dissolution, from the moment of death until the total destruction of the individual. This dark work is made of wax, so naturally colored that nature itself could not be more expressive or more true. When we gaze at this masterpiece, the impression is so powerful that the senses seem to warn one another: in spite of oneself, one covers his nose with his hands.”

Strangely enough, in the paragraph Impossibilia, Roland Barthes goes on to describe the Sadian language thus: “Language has this property of denying, ignoring, dissociating reality: when written, shit has no odor; Sade can inundate his partners in it, we receive not the slightest whiff, only the abstract sign of something unpleasant.” If language has this property, then what are the possibilities of the gaze and of this mutual warning of the senses? As Sade put it, “one covers his nose with his hands”, unless all this, according to Barthes, has no odor? My heart wavers between the concrete smell and the “abstract sign”, between nausea and fascination; I leave the cathedral, relieved to have remembered this wax vanitas. As soon as I step out of the church, I come across a plumber’s van. As if in a dream I see a plumber dressed as a priest and wearing a miter; and, further away, in the shade of the bronze leaves burnt by the summer sun, the ghosts of Sade and Zumbo vanishing in the autumnal light. 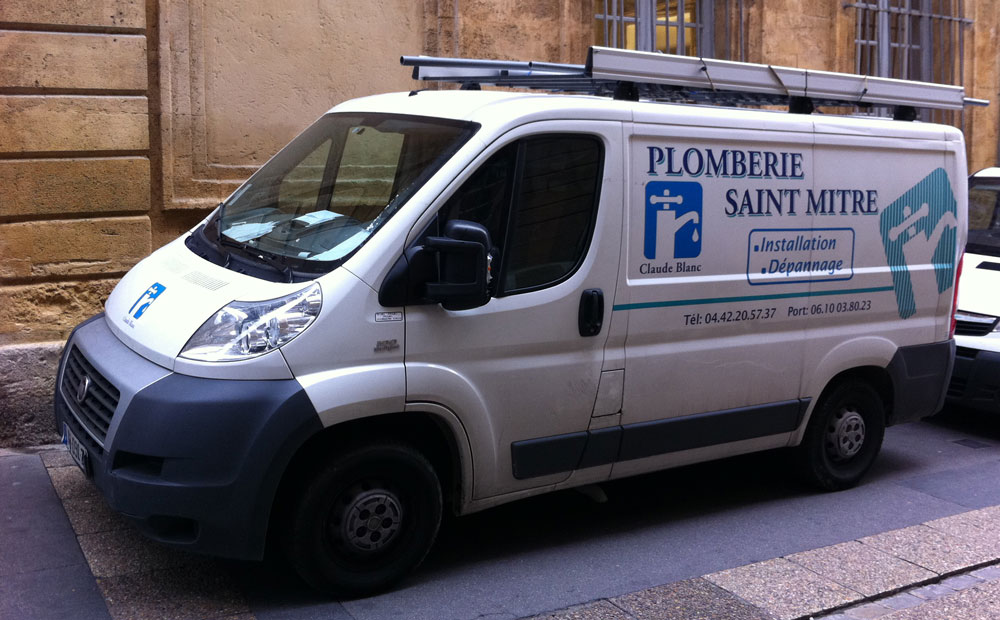 
[1] Pun on the name of the county, or department, Bouches-du-Rhône (literally “Mouths of the Rhône river’) and the French word “bouge”, which means “hovel” or “sleazy bar”.
[2] A Direction régionale des Affaires culturelles (DRAC, Regional Directorate of Cultural Affairs) is a service of the French Minister of Culture on each region of France. Created by André Malraux, minister of Culture, in 1963, they are in charge of heritage buildings, museums, cinema, theatre, art, etc.